OBJEKT V is an augmented sculpture developed in the scope of an artistic research project with the working title LUMEN.
The conceptual starting point of the associated works was to create wall objects located in the dynamic area between virtuality and reality.
The basic idea was to establish a connection between the contrasting poles of a world that is increasingly separated into virtual and real spaces.
Based on a plug-type system, the sculpture was designed as a virtual 3D-object. Using a 3D-printer and wood as a natural material, this virtual draft was transferred into a tangible condition.
The resulting physical object constitutes the artwork’s “real” dimension. It seems to grow out of and into the underlying wall at the same time and, thereby, integrates into the spatial surroundings.

The projected light – the virtual dimension of OBJEKT V – influences the relationship between the sculpture and the surrounding space. With a high end projector, as the only physical illuminant, we tried to achieve the illusion of multiple light sources interacting with both the sculpture and its ambiance. By merging the object shadows with their virtual counterparts, the logical reactions of light and shadow are subtly subverted to cause slight and yet playful irritations of the spectator’s perception. 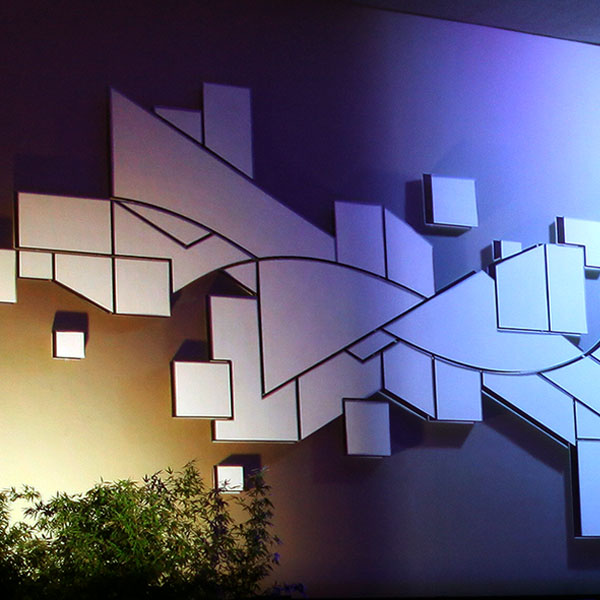